1) Which of the following is a plant hormone?

3) The brain is responsible for
(a) thinking.
(b) regulating the heart beat.
(c) balancing the body.
(d) all of the above.

ANSWER:- all of the above.

4) What is the function of receptors in our body?
Think of situations where receptors do not work properly. What problems are likely to arise?

ANSWER:- Receptors are sensory structures (organs/tissues or cells) present all over the body.
When the receptors are damaged, the external stimuli transferring signals to the brain cannot be felt.

5) Draw the structure of a neuron and explain its function. 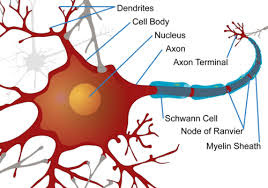 Functions of the three parts of a neuron:
Axon: It conducts messages away from the cell body.
Dendrite: It receives information from axon of another cell and conducts the messages towards the cell body.
Cell body: It contains nucleus, mitochondria, and other organelles. It is mainly concerned with the maintenance and growth.

6) How does phototropism occur in plants?

7) Which signals will get disrupted in case of a spinal cord injury?

8) How does chemical coordination occur in plants?

ANSWER:- Plants respond to stimuli by showing movements. The growth, development, and responses to the environment in plants is controlled and coordinated by a special class of chemical substances known as hormones. These hormones are produced in one part of the plant body and are translocated to other needy parts.

9) What is the need for a system of control and coordination in an organism?

ANSWER:-All the movements that occur in response to stimuli are carefully coordinated and controlled. In animals, the control and coordination movements are provided by nervous and muscular systems. The nervous system sends messages to and away from the brain. The spinal cord plays an important role in the relay of messages. In the absence of this system of control and coordination, our body will not be able to function properly.

10) How are involuntary actions and reflex actions different from each other?

11) Compare and contrast nervous and hormonal mechanisms for control and coordination in animals.

12) What is the difference between the manner in which movement takes place in a sensitive plant and the movement in our legs?