Today, I am going to give you a detailed analysis about the poem, frog and the nightigale which is on the syllabus of Class X CBSE. The anaylis I have given below is very easy to understand and is written in very simple language. I hope you will like it! 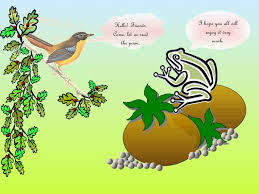 BACKGRAOUND OF
FROG AND THE NIGHTINGALE

The poem was written by Vikram Seth in 1994 and was published by the Evergreen Publications (India) Limited. It has got the acclaims to be the part of “The golden Lyre”.

“The frog and the Nightingale” is a perfect fable unfolding the story of a frog and a nightingale. The poem tells us how a frog traps an innocent virtuous nightingale and brings an end to her art. This poem is aimed to mock the prevailing social state and leaves us in front of a lot facts to think.

FROG AND THE NIGHTINGALE-
A FABLE

A fable is a short story in which plants, animals, mythical creatures are attributed with human qualities ending in a moral. “Frog and the Nightingale” even qualities the tenets of fable when we find the frog and nightingale acting like humans presenting us an interesting story with a didactic message.

The poem is of 140 lines and written in 10 line stanzas with couplet rhyming.
Once upon a frog
Croaked away in Bingle
Every night from dusk to dawn
He croaked awn and awn and awn

The poem is filled with alliteration, enjambment, inversion, antithesis etc.

FROG AND THE NIGHTINGALE-
A MOCK TO THE SOCIETY.

The poem is aimed to satire the societal system. Fresh and new talents are never welcomed by the critics. Critics are only for negative criticism. They are never for constructive criticism. They try to pull the talent down shamelessly and curb their future prospect. Criticism is important to turn someone perfect and pure. But in our form of society it is done for opening up the negativity of the new talent and never encouraging them.

FROG AND THE NIGHTINGALE-
A JAB TO THE HYPOCRITE.

We find a double faced character trait in the frog. He presents himself to be a hypocrite. At the concluding part of the poem when the nightingale was killed, the frog stated that the nightingale should have known that her song must be her own. Whereas it was the frog himself who changed the signing of the nightingale and destroyed his rival in the bog.

DETAILED EXPLANATION
OF THE POEM

Once upon a time there was a frog who used to croak (hoarse singing) away in a bog named Bingle. It was his daily work. From dusk to dawn he continued his rough singing. The other creatures of the Bingle Bog hated the voice of the frog. But they had no other option but to listen his voice. And the frog continued his rough unpleasant singing from the foot of the Sumac tree.

To stop the frog from his awkwardly unpleasant and rough singing ,the other animals of the Bog used stones, sticks, bricks and they even prayed, insulted and complained. But all their efforts went futile, at this juncture, one night there came a nightingale. It flew and sat on the top of the sumac three and sang the most beautiful song ever the animals of the bag heard. The frog was a gaped and speechless at the sweet voice of the nightingale. Even all other creatures of the bog even stared at the frog with utmost amazement.

When the nightingale ended her song every creature of the bag was amazed and elated. Ducks and herons out of attractions moved towards the nightingale. Even a lonely loon cried as the music of the Nightingale touched his heart. Toads, teals and tidlers requested the nightingale to sing more. The nightingale was not habituated with this high applause and compliments. So she was carried with the praising and sang till the morning.

After the grand performance in the first night , the nightingale was preparing herself for the next night. She shook her head, twitched her tail, fluffed a wing, closed an eye and cleared her throat to sing. At this very moment the frog emerged with a sound of croak. The nightingale inquired about him and he boastfully declared himself the owner of the tree and as well as presented himself as the great musician and singer.

Poetic devices in use :

The heartless frog snapped the enthusiasm of the nightingale by saying him not to boast as without proper training the nightingale will not be able to prosper and will remain merely the beginner. He also bragged that such training is impossible to be imparted by none but him. And if she is trained and guided by the frog she is sure to reach to the acme of fame. At this the simple and stupid nightingale turned flattered and stated the frog to be the Mozart and the whole happenings as fairy tale. At this the wicked frog reminded the nightingale about his fees as he would abuse the nightingale and at the same time bring an end to her.

When the frog agreed to be the trainer and mentor to the nightingale, the nightingale was much inspired. With enhanced confidence, the nightingale sang and created sensation. Many animals who were mesmerised by the singing of the nightingale came in group to behold and enjoy the magical sound of the animals and collected admission fees. Next morning, the first day of the nightingales training, it started raining. The frog with ill intention did not care about the weather and started the tra9ining.

As the rainy weather was adverse for singing the nightingale stated that she could not sing in this weather. But the frog who had only one aim i.e. to destroy her voice instructed her to put on scarf and sash and follow his training. He showed her the negative method ‘koo-oh-ah! Ko-ash! Ko-ash!” And the frog practised up and down in scale with his wicked intention. For long six hours they practised and in that detrimental weather she started quivering. And the aftermath was the hoarse voice of the nightingale. The nightingale was exhausted and was suffering from the lacuna of sleep. In spite of these inimical situations at night her voice restored.

Poetic Devices in use:-

At night the whole sumac tree was overburdened with acclaimed and celebrated crowd. The goes on naming some of the august animals though those are fully imaginary and does not have any resemblance to any real life animal. Then the poet goes on describing how the ladies with tiaras and luminous look continued to chat. In this jubilant situation the frog was the only one who was in pang. He was at the same time happy and as well as envious. He was happy as he was having a free flow of money but envious because the nightingale glorified.

Poetic devices in use :

Scolding turned out to be a daily matter for the frog who earned handsome selling the song of the nightingale. He forced the nightingale to practice longer and harder till his voice turns stronger like the frog. He even stated her examples how the nightingale got nervous in the second song last night. And the frog advised the nightingale to use frills as audience like those. He reminded her to perform better which would bring him money as she still owed sixty shillings to the frog.

Poetic devices in use:

As the nightingale was taught in all wrong way with the intention of destroying her voice she started to perform below her reputation. She lost her confidence. She was totally dejected. The zipping, trillings and bouncing in her voice destroyed her voice and very few animal came to enjoy her song. This made her even miserable singing all alone at night did not inspire her.

Lines – 123 – 130
Out Of anger the frog censured the nightingale and addressed her as brainless with indecorous tone he instructed the nightingale how to perform and puff lungs out with passion. Completely traumatised the nightingale puffed her lung, tried to sing and had her vain burst ensuring her demise.
Poetic Devices in use:

After the death of the nightingale, the frog turned pole asunder and blamed the nightingale with all negative words. He declared her as a stupid creature that is nervous, tense and prone to influence. He, like a hypocrite stated that the nightingale should have known that her song is her own. He then went on lecturing about his own singing style. At the end the Bingle Bog remained without any rival against the frog.

Poetic Devices in use :