1) State the location & functions of different types of meristems.

On Basis of location it is of 3 types

a) Apical – Present at the apices of stem, root & their branches & functions as growth in length, formation of primary tissues.

b) Intercalary – It is found below or above the stem nodes & leaf bases & functions as growth of internodes leaves & correction of position in lodged stems.

c) Lateral – a) cork cambium – develops from hypoderms in stems & pericycle of root and functions as protective cork.

Functions :- Formation of secondary phloem on outside & secondary xylem on innerside.

2) Cork cambium forms tissues that form the cork. Do you agree with this statement?

3) Explain the process of secondary growth in stem of wood angiosperms with the help of schematic diagram. What is its significance?

Secondary growth in stem is because of two types of cambium 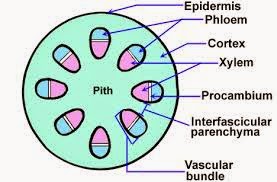 Significance – It resums in the thickening of a stem, stalk or root, produced by cell division in vascular cambium.

4. Draw illustrations to bring out anatomical difference between 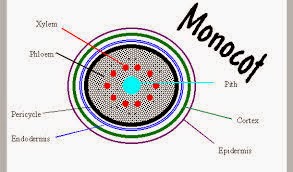 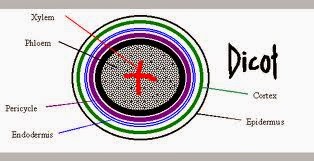 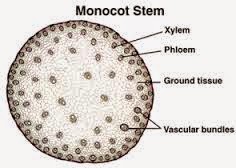 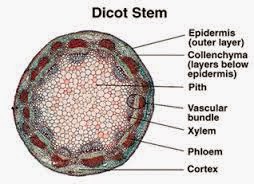 Diagram given in ncert book.

5,   Cut a transuerse section of young stem of a plant from your school garden & obscruit under the microscope. How would you ascertain wheather it is monocot stem or dicot stem give reason.

If the section is of dicot stem if it has concentric arrangement of ground tissues, open vascular bundles arranged in polygon vessels.

If the section is of mono cot stem the ground tissues are undifferentiated, vascellar bundles are closed.

A complex tissue is one which contains more than two types of cells which perform common function.

As xylem is formed of 4 types of cells –
Tracheids, vessels, xylem parenchymja & xylem fibres which all help in conduction of sap.

Phloem is formed by 4 types of cells – sieve companion cells, phloem parenchyma & phloem fibres . they help in conduction of food – to directional

7.   What is stomatal apparatus ? Explain the structure of stomata with labelled diagram.

A pair of guard cells with or without surrounding subsidiary cells that functions as a value to open or close a stomatal pore forf gaseous exchange & transpirations is called stomatal appa – ratun.

The guard cells contains choloropp[last & small voceloles which are thick – walled in the area opf contact & thin walked else where. When the guard cells swellep due to on do osmosis the thin – walled sides expand. The thick walls of the two guarfd cells swell up[ due to endo-osmosis & the thin wall side expands.

8.   Name the three baris tissue systems in the following flantgs. Give the tissue name under each system.

10. What is periderm? How periderm formation does takes place in dicot stem?

Phellogen or cork cambium – It develops in a subepiderminal layer in stem & from pericycle in roots & undergoes bipolar divisions. The all of the outer side undergoes deposition of tannins & death of cellular contents. The outer tissue of dead subsidiary cell is called phellem.