7.
a.) Read the second stanza again, in which Wordsworth compares the solitary reaper's song with the song of the nightingale and the cuckoo. On the basis of your reading (and your imagination), copy and complete the table below. (Work in groups of four, then have a brief class discussion.) 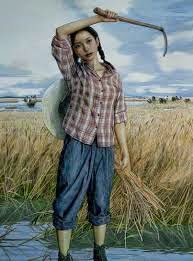 b) Why do you think Wordsworth has chosen the song of the nightingale and the cuckoo, for comparison with the solitary reaper's song?

Answer- Wordsworth assay was to celebrate the solitary reaper’s song to the utmost. He wanted to express the enchanting effect that the song had on him. Nightingale and cuckoo are considered as best singing birds and are referred by many poets. To establish the supremacy of the song of the solitary reaper; the poet must move brought the reference of the best singing birds.

c) As you read the second stanza, what pictures come to your mind? Be ready to describe them in your own words, to the rest of the class. (Do not be afraid to go beyond what the poet has written.)

Answer- Mesmerised by the song of the nightingale, Wordsworth went on comparing the song of the solitary reaper to nightingale and cuckoo. When the fatigued and exhausted travellers in the Arabian Desert take shelter in the oasis (shady haunt) to take rest, the nightingale welcomes them with her sweet song. But the nightingale with its sweet melody could not surpass the enchanting effect of the solitary Reaper. Another bird Cuckoo also hast its melodious effect on us. According to the poet, the Cuckoo bird breaks the silence of the Hebrides with its sweet music. But even it does not have a thrilling voice as the solitary Reaper.

8.  In the sixth line of the first stanza, we read:
"... and sings a melancholy strain,..."
This "s" sound at the beginning of sings and strain has been repeated. Poets often do this. Do you know why? Do you know what this "poetic repetition" is called? Can you find other instances of this, in The Solitary Reaper?

Ans:-     Repetition is a literary device that repeats the same words or phrases to emphasize on a point or to make an idea clearer.

When the words or phrases are used repeatedly in poetry for emphasizing on a point or for the sake of rhyme-scheme, it is called poetic   repetition.

Some other examples of poetic Repetition used in the poem are

i)      Welcome notes to weary bonds
ii)    Silence of the seas.
iii)  The music in my heart I bore long after it was heard no more.

9.   In the first stanza, some words or phrases have been used to show that the girl working in the fields is alone. Which are those words and phrases? What effect do they create in the mind of the reader?

Answer-The words or phrases that show that the solitary reaper was working alone and the field are:-

i)      Single in the field.
ii)    Solitary highland lass
iii)  Alone she cuts, and bonds the grain

The poet was utterly mesmerised with the placid  atmosphere. He had got the utmost effect of the song as he was not disturbed interrupted by any individual. 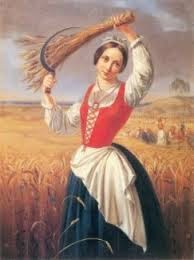