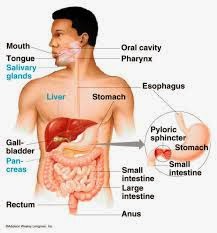 3) A) Why are villi present in the intestine & not in stomach?

To increase the surface area of the intestine for the efficient absorption of digested food villi are present in intestine.

b) How does pepsinogen changes into its active form?

Pepsin (inactive form) is first changed by HCL into active enzyme pepsin. Then through autocatalysis more of pepsinogens get activated to pepsin.

c) What are the basic layers of the wall of the alimentary cannot?

d) How does bile help in the digestion of fats?

4) Give the teeth formula of human beings
=

5) Describe the digestive role of chymotrypsin. Which two others digestive enzymes of the same category are secreted by its source gland?

Chymotrypsin converts; proteins into large peptides, Trypsin &   Elastase are two other digestive enzymes of the same category are secreted by its source gland.

7)   What would happen if HCL is not secreted in the stomach?

Pepsinogen (proenzyme) & prorenin (pro-enzyme) will not be concentrated into pepsin & rein respectively. Hcl provides acidic medium so that the enzyme can act on food in stomach. Hcl kills bacteria & other harmful organism that may be present along with food.

8)   Explain the term thecodont & diphyodont?
In human beings, teeth are embedded in pits, the sockets of the jaw bones. Such teeth are called thecodont.

The teeth that appear in two sets i.e. milk teeth which are latter replaced by permanent teeth. This condition is called diphycodont.

9)   Name different types of teeth their no in an adult human.

10) State the role of pancreatic juice in digestion of proteins

Pretium 1 peptones & proteases are acted upon as given below

11) Describe the process of digestion of protein in stomach.

The digestion of proteins in stomach is caused by the actions of gastric juice. The stomach contains Hcl, proenzymes – pepsinogen & prorenin. Hcl mainly maintains a strong ph balance of body about 1.5 to 2.5 in the stomach. They kill the bacteria entering with food .hcl converts pepsinogen and prorenin into pepsin and rennin. Once pepsin is formed it changes pepsinogen into pepsin. Such activation is called autocatalytic reaction. Pepsin and rennin are absent in invertebrates’. Gastric juice is thoroughly mixed with food until it becomes a semi fluid mass called chyme

12) Bite juice contains no digestive enzyme yes it is important for digestion why?

Bite contains no digestive enzyme yet it is important for digestion. Why?
1. Neutrilises hcl
2. Emulsification
3. Activate lipase
4. Absorption of fats and fat soluble vitamins

13) How does butter in your food get digested & absorbed in the body?

Saliva contains no lipase. The stomach also lacks much fat emulsifying agent. However the gastric juice contains small amount of gastric lipase active some fat into mono glycerides & fatty acids. That is largely digested on small intestine. But bile break down fat droplets into may small ones by reducing the surface areas of fat droplets. This process is called emulsification. & increase lipase action on fat. Pancreatic lipase to the principal enzyme for the digestion of fat. In addition intestinal lipase in also helpful in digestion of fat

14) Discuss the main steps in the digestion of proteins as the food posses through different parts of canal.