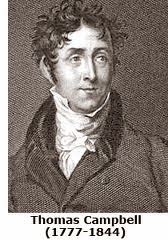 Analysis of the Poem

A chieftain, to the Highlands bound,
Cries, ``Boatman, do not tarry!
And I'll give thee a silver pound
To row us o'er the ferry!''—

A chieftain who is going to the highlands cried and said to the boatman not to make late. If he takes him and his beloved (Lord Ullin’s daughter) across the Lochgyle, he will give him a silver pound. (Money)

The chief or head of a clan.

A group of families among the Scottish Highlanders, the heads of which claim to be descended from a common ancestor, the Mackenzie clan.

·         Ferry – The commercial service of takings persons across a river. 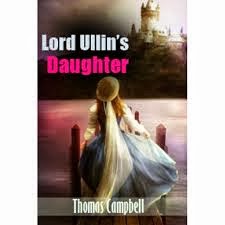 ``Now, who be ye, would cross Lochgyle,
This dark and stormy weather?''
``O, I'm the chief of Ulva's isle,
And this, Lord Ullin's daughter.—

The boatman asked who he was willing to cross Lochgyle is this stormy and dark weather .The Chieftain answered that he was the chieftain of Ulva’s island and with him was Lord Ullin’s daughter, his beloved.

``And fast before her father's men
Three days we've fled together,
For should he find us in the glen,
My blood would stain the heather.

And take us before her father’s men come and get them. We have fled together for three days. If her father (Lord Ullin) finds us, he would stain the heather plant with my blood.

``His horsemen hard behind us ride;
Should they our steps discover,
Then who will cheer my bonny bride
When they have slain her lover?''—

Lord Ullin’s armed horsemen are chasing them close. If they find and get them, then who will make his beautiful beloved happy because he is sure that they will kill him.

Out spoke the hardy Highland wight,--
``I'll go, my chief--I'm ready:--
It is not for your silver bright;
But for your winsome lady:

The boatman who is the strong and brave one belonging to the high mountain region said that he would go taking them across the river. But not for money he would take for the beautiful lady.

``And by my word! the bonny bird
In danger shall not tarry;
So, though the waves are raging white,
I'll row you o'er the ferry.''—

The boatman says that he swears not to keep the lady, Lords Ullin’s daughter in danger any more. Though waves are getting violent and furious and foaming (white). He will take them across the Lochgyle.

By this the storm grew loud apace,
The water-wraith was shrieking;
And in the scowl of heaven each face
Grew dark as they were speaking.

In the meantime the storm turned to be a rough and violent. It seemed as if the water ghost was shouting. The sky turned darkish and the turbulence of the sky looked as if of frowning look which brought darkish flush on the face of all three. 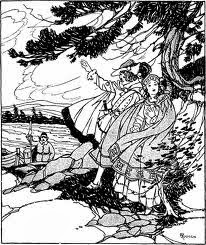 But still as wilder blew the wind,
And as the night grew drearer,
Adown the glen rode armèd men,
Their trampling sounded nearer.—

The wind was blowing rough and violent, night started to grow darker and rough. . Suddenly from the glen sounds of the armed soldiers were heard coming  towards them.

``O haste thee, haste!'' the lady cries,
``Though tempests round us gather;
I'll meet the raging of the skies,
But not an angry father.''—

Lord Ullin’s daughter requests the boat man to move faster. Though wild windstorm is there she would prefer to face the anger of the sky than to face her angry father.

The boat has left a stormy land,
A stormy sea before her,--
When, O! too strong for human hand,
The tempest gather'd o'er her.

After they left the stormy land, they got the stormy sea before and storm was more powerful than them and ensured their defeat.

·         The tempest gathered over her: - The storm and the rain was strong and soon overturned the boat.

And still they row'd amidst the roar
Of waters fast prevailing:
Lord Ullin reach'd that fatal shore,--
His wrath was changed to wailing.

They fought hard against the deadly waves of water till their last breath. In the meantime Lord Ullin came to the fatal shore, - the anger he bore against them changed into mournful wailing.

For, sore dismay'd through storm and shade,
His child he did discover:--
One lovely hand she stretch'd for aid,
And one was round her lover.

Through the storm and shade, in pain and Shock he found his child. The beautiful girl stretched her one lovely hand towards her father meaning to save and the other was around the lover which was even very dear to her.

``Come back! come back!'' he cried in grief
``Across this stormy water:
And I'll forgive your Highland chief,
My daughter!--O my daughter!''

At this situation Lord Ullin understood his fault and requested his daughter to come and promised to forgive her lover. He was wailing at the shore.

'Twas vain: the loud waves lash'd the shore,
Return or aid preventing:
The waters wild went o'er his child,
And he was left lamenting

As the big violent loud waves had made the lochgyle terrible, so no aid from outside on no return of them from water was possible. A big wave dashed o’ver his child and he was left mourning.